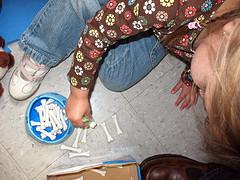 Did you Jesus the Nazarene offspring? The success of the novel the Da Vinci Code has become subject of fashion the issue of whether there was an offspring of Jesus. The author of a book of recent appearance – the legacy of Magdalena – Maria, has made a fascinating investigation of iconographic documentation which resulted in important unpublished findings. In this article we extractamos some of their findings. Jose Luis Gimenez my source of information, I had located a mysterious trip. A journey that would take me to discover unusual and unknown aspects about the figure of Maria Magdalena, the Christian tradition gave name to the Jewish Myriam Migdal or Myriam de Magdala, which plays an important role in the new testament of the Bible. Much has been written about Jesus the Nazarene, name that some attribute to the village of Nazareth. On the other hand, other authors argue indicating their membership in the Jewish sect of the Nasrid or Nazareos, whose votes included do not cut hair or beard. However, very little is known with certainty about his life.

The New Testament contains some fundamental moments of the life of Jesus in the four canonical Gospels. But these only make reference to his public life with the aim of demonstrating that he was the Messiah promised to Israel. and in a manner biased with regard to your private life. In other texts, known as Apocrypha, we can obtain a supplementary information. These include those discovered in 1945 at Nag Hammadi (high Egypt).

Cuno Gnostic apocryphal Gospels it speaks of a Jesus intimately linked with Maria Magdalena, and even says that Pedro showed some misgivings and envy toward this woman, refusing to accept that, after his death, risen Christ had entrusted to him his secret teachings and the primacy over the community of his followers. According to some of these texts such as the Gospel of Philip, Magdalena was the companion or consort of Jesus, and even mentions the existence of an offspring of both in clear terms: there is the mystery of the son of man and the mystery of the son of the son of man.